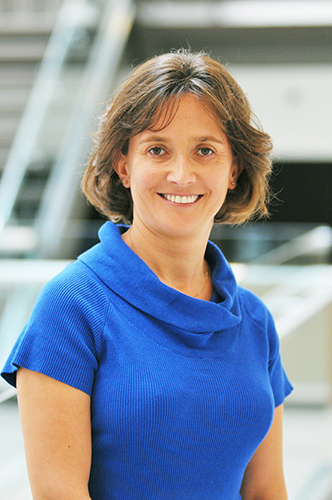 Christine Beeton is an immunologist with an interest in autoimmunity. She received a Bachelor and a Master of Science in Biochemistry from the Faculté des Sciences de Luminy within the Université de la Mediterranée in Marseille, France. She joined Dr. Evelyne Béraud’s group for her PhD in Immunology. After graduation, she moved to the University of California, Irvine, to join Dr. K. George Chandy’s group in the Department of Physiology and Biophysics as a Postdoctoral Fellow in 2001. She was promoted to Assistant Researcher in 2006 and joined the faculty of the Department of Molecular Physiology and Biophysics at Baylor College of Medicine in 2008. In 2010 she assumed the role of Academic Director of the Cytometry and Cell Sorting Core for the Dan L Duncan Cancer Center at Baylor College of Medicine. She was promoted to Associate Professor with Tenure in 2015.
As a Graduate Student, Christine Beeton was the first to show the benefits of blocking Kv1.1 and Kv1.3 channels with the scorpion venom peptide kaliotoxin to prevent and treat adoptive acute experimental autoimmune encephalomyelitis, an animal model of multiple sclerosis. She went on showing, in collaboration with Drs. Chandy and Wulff, that encephalitogenic T lymphocytes express more Kv1.3 channels then naïve T lymphocytes do and that targeting Kv1.3 channels only with ShK-Dap22 was sufficient to treat this model of multiple sclerosis. As a Postdoctoral Fellow, she continued her collaborative work with Dr. Wulff who showed that terminally differentiated human CCR7- effector memory T (TEM) lymphocytes up-regulate Kv1.3 channels upon activation whereas CCR7+ naïve and central memory T (TCM) lymphocytes up-regulate KCa3.1 channels. She demonstrated a similar switch in potassium channel phenotype in rat, but not mouse, T lymphocytes. In collaboration with the groups of Drs. Nepom, Andrews, and Calabresi she showed that T lymphocyte isolated from the synovial fluid of patients with rheumatoid arthritis and from the cerebrospinal fluid of patients with multiple sclerosis express high numbers of Kv1.3 channels. Through collaborative work with the groups of Drs. Pennington and Norton, she developed a novel analog of ShK, ShK-186, as a highly potent and selective blocker of Kv1.3 channels. ShK-186 preferentially inhibits human and rat TEM lymphocytes in vitro and in vivo and treats animal models of delayed type hypersensitivity, multiple sclerosis, rheumatoid arthritis, and asthma without preventing the clearance of acute viral or bacterial infections. Drs. Chandy, Beeton, and Pennington are inventors of a world-wide patent on ShK-186 (dalazatide) and related compounds. This patent was licensed to Kineta, Inc. (Seattle, WA) for the development of a new class of immunomodulators for the treatment of autoimmune diseases. Phase 1a and 1b clinical trials in healthy volunteers and patients with plaque psoriasis have shown that ShK-186/dalazatide is well tolerated and displays efficacy.
More recently, her group has focused on the production and delivery of recombinant analogs of ShK and other venom-derived Kv1.3 blockers. Her laboratory has also identified KCa1.1 as the major potassium channel at the surface of fibroblast-like synoviocytes (FLS) from patients with rheumatoid arthritis. Their ongoing work in this area focuses on understanding the mechanisms of KCa1.1 expression and function in FLS and on developing selective KCa1.1 blockers as potential therapeutics.
Christine Beeton has also begun a collaboration with Dr. Tour at nearby Rice University, to elucidate the mechanisms of action of carbon-based antioxidant nanoparticles in T lymphocytes and their potential as novel immunomodulators for T lymphocyte-mediated autoimmune diseases.

The Beeton Laboratory
Advanced Technology Cores at Baylor College of Medicine
Biology of Inflammation Center
Graduate Program in Immunology and Microbiology
Graduate program in Development, Disease Models and Therapeutics
Ask me about my research

Ask me about my research