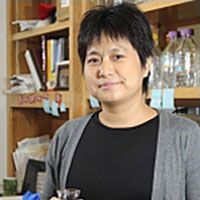 Polycomb group proteins (PcGs) and Trithorax group proteins (TrxG) are evolutionarily conserved regulatory factors that regulate directly the expression of hundreds of genes involved in differentiation, development, cell fate decisions, stem cell self renewal, X-inactivation in females and genomic imprinting. Mutations of these proteins are implicated in defects in stem cell fates and their abnormal levels show good correlation with the severity and invasiveness of at least 11 cancer types including prostate cancer and breast cancer. Our laboratory is combining bioinformatics, biochemistry, biophysics and structural biology approaches to elucidate the molecular mechanisms of PcG and TrxG-mediated epigenetic regulation in embryonic stem cells and cancer cells. Ultimately, the insights gained from these structural and functional studies are expected to aid in the development of therapeutic agents for clinical intervention.

Actin is the most abundant protein in eukaryotic cells. It exists primarily as monomers (G-actin) bound by G-actin binding proteins that prevent spontaneous nucleation of new actin filaments, making nucleation the rate-limiting step in forming filamentous actin (F-actin). In response to cellular signals, specific actin nucleators initiate actin polymerization in a tight temporally and spatially controlled manner, which regulates many fundamental cellular processes including cellular motility, cell shape and polarity determination, and embryonic development. Understanding the de novo actin nucleation in response to stimuli lies in the core of modern biology. Our laboratory is combining bioinformatics, biochemistry and structural biology tools to investigate the molecular mechanisms of actin cytoskeleton in signal transduction.

Influenza virus is a negative-stranded RNA virus belonging to orthomyxoviridae family. Infections caused by influenza A and B viruses remain a major source of human morbidity and mortality worldwide, due to naturally evolving strains and to their potential use as man-made bio-weapons by terrorists. They both have a major surface glycoprotein HA that are responsible for binding to cell-surface receptors and for entering into host cells for replication. We are investigating the structures and functions of influenza A and B virus HAs. These include influenza A virus H1N1, H3N2, H5N1 and influenza B virus. Development of anti-influenza inhibitors is also underway.