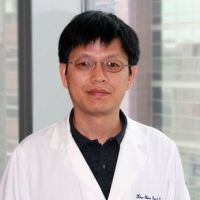 Professor of Molecular and Cellular Biology
Baylor College of Medicine

Dr. Feng's research aims to elucidate the underlying mechanisms and interplays among protein modifications, signaling pathways, and gene transcription as well as understanding their roles in cell proliferation, tissue differentiation, and pathogenesis of human diseases. Immune suppression by TGF-ß:
TGF-ß is a major inflammatory and immune-regulatory cytokine, but the mechanisms by which TGF-ß exerts its actions are unclear. We are interested in investigating the signaling interactions between the TGF-ß pathway and other cytokine pathways (such as TNF-alpha, IL-1, and IL-6 pathways) in immune responses. This area of research may lead to the discovery of drugs to treat cancer and inflammatory diseases. Genetic screens, BMP/TGF-ß signaling, and ES cells:
We are conducting genome-wide studies (e.g. genetic screens using lentiviral RNAi library) to identify novel TGF-ß signal modifiers or regulators involved in stem cell differentiation. Novel molecules that control TGF-ß/BMP signaling or participate in human ES cell self-renewal and differentiation will be further studied and in model organisms to define the molecules’ physiological roles in tissue differentiation and organ development. TGF-ß/BMP signal transduction:
SMADs are evolutionarily conserved signal transducers and transcription factors controlling TGF-ß/BMP functions. A large number of mutations that inactivate SMADs have been linked to human cancers and genetic diseases. We address the molecular interactions, requirements, and functionality of SMADs in TGF-ß/BMP responses using cellular, genomic, and proteomic approaches. We investigate how SMADs mediate transcription and how their actions are terminated. We also use in vitro and in vivo model systems to study how SMADs as tumor suppressors interplay with oncogenic pathways, in particular with those involved in lymphoma and in pancreatic and breast cancer. SUMO, ubiquitin, and control of protein turnover and functions:
We examine the effect of post-translational modifications, particularly ubiquitination and SUMOylation of transcription factors, in normal and cancer cells. We attempt to understand the molecular mechanisms by which environmental and developmental cues regulate the ubiquitination/proteasome and SUMOylation systems. Our studies will provide insights into the relationships between protein deregulation and human cancers or abnormal development. Phosphatome: genome-wide investigation of protein dephosphorylation:
Signal transduction pathways are often regulated by the dynamic interplay between protein kinases and phosphatases. Using all the human protein serine/threonine phosphatases available, we systematically investigate the effect of dephosphorylation on key proteins involved in cell signaling and cell functions. We are currently genetically disrupting individual phosphatases to elucidate their in vivo functions during development.