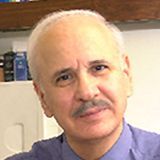 By applying and devising tools of chemistry, we completed mapping and synthesis of the antigenic sites (epitopes) of myoglobin and lysozyme, in 1975 and 1978 respectively. These were the first two proteins for which 3-D structures were known. We have since determined antigenic structures of at least 10 more proteins and mapped T-cell recognition for eight of them. In a series of articles, many of which are citation classics, this laboratory provided first comparisons of T- and B-cell recognition of proteins at a sub-molecular level and demonstrated roles of epitope-specific interactions involving T- and B-cells. We showed that Ab and T-cell responses to each epitope are controlled separately by the host’s Major Histocompatibility Complex (MHC). Our pioneering discovery that small peptides are immunogenic provided a powerful tool in biology and medicine.

We defined and synthesized acetylcholine receptor (AChR) functional sites, including those for acetylcholine, α-neurotoxins, autoAbs and/or T-cells. AChR is involved in postsynaptic neuromuscular transmission. Detrmination of its functional sites provided molecular explanation for myasthenia gravis, an autoimmune disease to AChR. Two or 3 auto-determinants, presented by certain DQ haplotypes, were pathogenic. We manipulated autoimmunity by epitope-specific immune tolerance, by tolerogen-conjugated suppression of pathogenic epitopes or by Abs against peptides mimicking the rim of the epitope-binding region on correlate HLA allele. This afforded tools for manipulating autoimmune responses by selectively targeting the epitope-binding region on a presenting MHC allele(s) without affecting immune functions of other MHC molecules.

We have determined and synthesized the functional regions on human DR2 antigen, a genetic restriction molecule involved in antigen presentation to human T cells, the functional sites of allergens, α-bungarotoxin, and influenza A hemagglutinin. Immunization with synthetic α-bungarotoxin or influenza A virus epitopes protected against correlate agent. Most recently we reported localization of the receptor, and Ab and T cell recognition sites on botulinum neurotoxins types A (see Figure) and B (almost 1300 residues each), the most toxic substances known. The findings elucidated the immune defense against these toxins and provided for rational designs of synthetic anti-toxin vaccines.

These contributions have afforded new tools for clinical, diagnostic and therapeutic applications and are widely used for molecular localization and synthesis of a variety of protein binding sites, and regions of molecular and cellular immune responses. Most notable have been the “synthetic overlapping peptides”, "surface-simulation synthesis" and peptide immunization.

Our findings that immune responses target selected sites on a protein surface were strongly criticized in 1983 because they contradicted a prevailing view that the “entire protein is recognized as a continuum”, but are now taken for granted. Dr. Atassi has received many honors and awards, mong which are the Kuwait Prize in Basic Sciences the Harden Medal and Jubilee Lecture of the Biochemical Society. He has been named Distinguished Lecturer and/or honorary professor by a number of US and foreign universities and institutions.

Dr. Atassi has published over 350 research articles and edited/co-edited 15 books. He is Editor-in-Chief of Protein Journal, Protein Reviews; Critical Reviews in Immunology, Forum on Immunopathological Diseases and Therapeutics; Editorial Committee of Immunological Investigations; Editorial Board member of a number of other journals; member Scientific Advisory Board of the Neurotoxin Institute; Scientific Advisory Board of Center for Bio-security Science, Los Alamos National Laboratory; President of the Institute of Immunobiology and International Symposium of Immunobiology, the King Faisal International Prize selection committees for science and for medicine. Previous positions include: Member of the Edman Award Selection Committee, Chair of International Conference on Methods in Protein Structure Analysis (MPSA 1994), co-chair of International Conference on Neurotoxins (ICON 2006).

Current research focuses primarily on mechanisms and manipulation of autoimmunity and molecular recognition of, and protection against, botulinum neurotoxins.